Cracking the Code: How a Duke Historian Discovered an Architect of the ‘Radical Right’

How a Duke historian discovered an architect of the radical right

DURHAM, N.C. – From the outside, nothing about Buchanan House advertises its importance. The two-story 1920s clapboard perches on the wooded edge of the George Mason University campus, barely inviting a passing glance. But inside, in a jumble of forgotten files, Duke historian Nancy MacLean found a fresh take on a critical American story: the rise of the “radical right.”

The Atlantic calls MacLean’s new book “Democracy in Chains” (Viking: 2017) “a vibrant intellectual history of the radical right.” The book spotlights James McGill Buchanan, a Nobel Prize-winning economist from Virginia. MacLean describes how Buchanan created a playbook for a movement that is reshaping American politics.

The Historian as Detective: Nancy MacLean’s search for the James Buchanan story

“I think we can’t stop what’s being done to our democracy unless we understand the ideas shaping this strategy and moving it forward. I try to provide that by getting into the mind of the person who created the roadmap.”

Buchanan allied with the politically active billionaire Charles G. Koch, with whom he launched what became the influential think tank, the Mercatus Center. He also wrote prolifically, and his ideas have since influenced the push to privatize government services, the move to limit voting rights and many other campaigns.

MacLean started her project after she spotted Buchanan in a footnote to a 1959 report on school segregation. 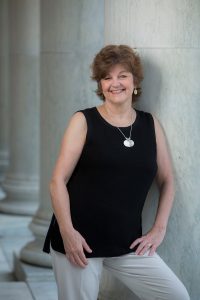 MacLean, William Chafe Professor of History and Public Policy at Duke, didn’t set out to write a book about James Buchanan. In previous books, she has examined the history of extremist right-wing movements such as the Ku Klux Klan. This time, she was investigating school closures in Prince Edward County in the late 1950s and early 1960s.

After the U.S. Supreme Court outlawed segregation, the county shuttered its public schools in defiance, opening private schools for white children supported by state and local tax dollars. The actions left nearly all the county’s black children, and a few white children, with no education for five years.

As MacLean dug into that story, she spotted Buchanan in a footnote to a 1959 report.

She was startled to find the distinguished professor, a University of Chicago graduate, advising segregationists on how to privatize public schools before the verb existed. Buchanan viewed Brown v. Board of Education as a case of government overreach, she learned. He criticized the modern state as a “Leviathan” that needed to be chained.

Indeed, Buchanan’s libertarian notions of limited government went much farther than traditional conservatism, MacLean discovered. He favored constraining democracy as much as possible, she writes, to protect the economic power and liberty of rich elites against the “tyranny” of majority rule.

“That’s when I thought ‘Wow, who am I dealing with here? Who is this person?’”

A second footnote sealed her interest in Buchanan’s story. In it, MacLean spotted a brief mention of Buchanan and the infamous Chilean dictator Augusto Pinochet.

Pinochet rose to power after a 1973 coup, and his regime soon became notorious for human rights abuses, including mass killings and torture.

Buchanan spent a week in Chile in 1980, advising Pinochet regime members and supporters. By that time, the regime’s abuses had been widely reported.

During his life, as Buchanan’s influence spread in conservative circles, he wrote almost nothing about his work in Chile. But after his death in 2013, MacLean gained access to his archives at Buchanan House. As she worked her way through stacks of unsorted files, she confirmed her hunches about Buchanan’s broad influence on the modern right. And, in a pile of folders in his office, she found letters between Buchanan and Chilean officials that made her catch her breath.

While in Chile, Buchanan offered government officials detailed counsel on how to draft a “constitution with locks and bolts,” MacLean says. He advised changing the country’s constitution to protect the rights of wealthy elites, so that future democratic majorities would be hard-pressed to alter it. When he returned, he wrote a thank you note to Chilean officials praising the fine dinner and the jewelry they gave his wife.

“Chile was the poster case of human rights violations in the 1970s and in the wake of that, that’s what he had to say,” MacLean says. “And that’s when I thought, ‘Wow, who am I dealing with here? Who is this person?’”

Back home, Buchanan also urged his allies to change the U.S. Constitution to limit the power of the majority and protect the rights of the wealthy few. MacLean sees Buchanan’s shadow in current calls for a new constitutional convention. Twenty-eight states have already passed resolutions calling for such a convention.

Given Buchanan’s sizable influence in right-wing circles, it may be surprising that he is not better known. But many who investigate the far-right focus on the money trail, MacLean notes. Far fewer have examined the movement’s ideas.

“Critics of what is happening on the right don’t read the theory,” MacLean says. “And Buchanan is a crucial part of that theory.”

MacLean relished the challenge of unlocking that code through a deep analysis of Buchanan’s story.

“History is a work in progress,” MacLean says. “Our knowledge is an approximation of the past; we can never quite get to it. It takes a ton of detective work.”

And for those who view history as irrelevant, the book offers potent counterevidence. It demonstrates the power of historical investigation to shed light on the present moment. MacLean agrees with the Italian historian Benedetto Croce, who said, “All history is contemporary history.”

“Each generation, as we face new challenges, new questions, new problems, begins to ask different questions of our past,” MacLean says. “And when we do that, we see different things.” 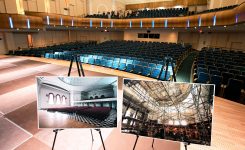 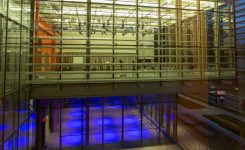 Faces of the Ruby 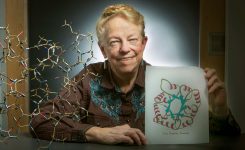 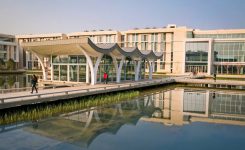 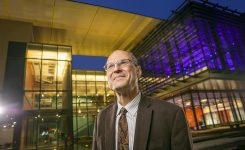 A Career in the Arts 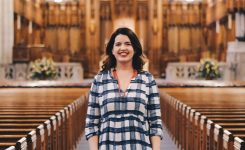 Kate Bowler: Things We Learn in the Dark